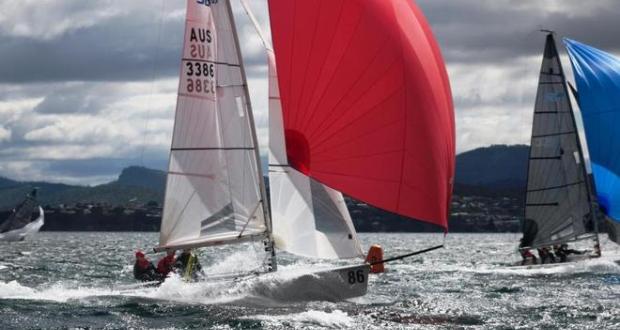 This interview with Glenn Bourke to give us some insight into championship and regatta strategy. He will show us How to Approach a Regatta in Big or Small Fleets. Glenn is currently the CEO of the wildly successful Hamilton Island home of Hamilton Island race week. Not only is Glenn a successful businessman but he is a high-achieving competitive sailor. He has multiple Olympic, World and National championship successes to his name.

You can generally get yourself clear air and away off the line and not be seen by the committee boat if you start a little bit away from that mad pack that generally goes over the line early.

So you might call it a conservative start, it’s probably not the Hail Mary start, but it’s one whereby you tuck yourself away and if the whole fleet goes, you’re probably not seen from an OCS or maybe you’re not an OCS because you’re behind the line, but they’re bulged out underneath you.

You’re still clear and going, but you’re not in the ruckus of the chaos at the end of the big fleet.

In smaller fleets, I think you can have the opportunity to be a bit more aggressive. To take the favoured end of the line because there’s not as much carnage there. You can pre-manoeuvre and do whatever else you need to do.

Some of it depends on who is your main competition, if it’s a small fleet and everybody’s even, then you want to get the best start. You want to get into the first shift first.

If it’s a small fleet, and there’s one other competitor that’s tough, you want to make sure that you get a slightly better start than that person so that you can control them up the first beat and take advantage of getting off the line a little bit better.

Glenn – There’s a number of them. First of all, you’ve got to be fast. In a big fleet, if you want to get to the front, you have to be fast.

If you can jump out of the start and clear yourself, tack across a group of boats and get into a really clear position, you ought to take that opportunity and do it straight away.

It depends where you end up at the first mark as to what your strategy might be after that.

You can’t compete in a big fleet unless you’re fast because you’re going to get spat out.  Then you are just going to be looking for crumbs on the table. Be assertive in your strategy or where you’re putting the boat compared to the fleet.

You make a transitional strategy from being very fast, off the line well. Getting to the first shift and trying to get around the top mark in good order.

At the beginning of the regatta, you are watching where your competitors are. Being generally in the right place, being generally a bit more conservative and covering their moves. Rather than necessarily trying to get the perfect regatta or the perfect race under your belt. ESSENTIAL BEFORE ROUNDING A MARK.

Become a Student of the Weather